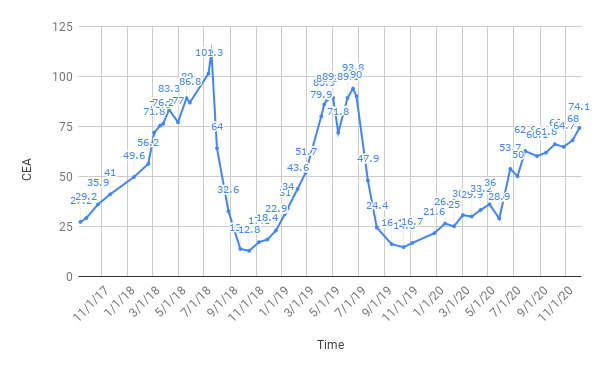 Above is a graph of CEA, a serum tumor marker. This is difficult for me to say, but I am not in a good position right now. In the past, the marker rising above 80-90 has been very uncomfortable. As of two weeks ago, it was 74.

With my cancer resistant to EGFR targeted therapy due to the EGFR T790M/C797S mutations, I have been riding my second round of traditional chemotherapy[1] for the past 18 months. Chemotherapy is what you think of when imagining cancer treatment. By broadly damaging cellular DNA, dividing cells are hit the hardest by this therapy. Luckily, my cancer has turned out to be sensitive also, with the expected collateral damage.

I have the typical side effects - fatigue, compromised immunity, hair loss, nausea, and loss of appetite.

Traditional chemo doesn’t get into the brain well, so the resistant disease in my body has made it’s way to my brain. In March, we discovered the cause of the nausea and disturbed balance I had been having when a follow up brain MRI revealed six small brain metastasis and an area read as leptomeningeal metastasis. This news was devastating.

Historically, leptomeningeal metastasis considered to be a dismal development with survival measured in weeks, but with EGFR+ targeted therapy some patient’s are living for years, including notably former actress Valerie Harper. So far, I’ve made it 9 months.

In top of this, like all of you, I’ve trying to survive the global COVID-19 pandemic with my family intact. As you might imagine having metastatic lung cancer and being on chemotherapy put’s one at somewhat increased risk if I ever develop COVID-19. My parents are at advanced age. My wife is a healthcare worker who see’s patients in person. I have been in quarantine since March, removing as much risk of contracting the virus, and human contact, as feasible.

As the chart shows, my disease has been progressing through the chemo for more than a year. I have far exceeded the average response time for second line chemotherapy in lung cancer. The toxicity to the non-cancer parts of my body has been accumulating. The chemotherapy cycles have been getting harder over time.

Still, the past 18 months have been the most meaningful 18 month period in my life. Mia was born on Sept. 19, 2019. Chemo has allowed me to be present for her birth, and the first 15 months of her life. I’ve been able to watch her first crawl, her first steps, her first words (she loves saying “dada”!), and she’s not done yet. Yes, it would have been better without the cancer and pandemic. But that doesn’t change the happiness I feel from spending this time with her. If you gave me the option to relive any of the past 18 month periods of my life, I would pick 6/2019 - 12/2020. 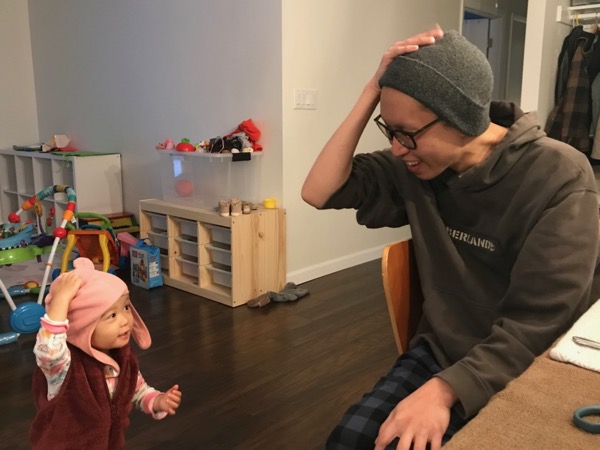 This current treatment protocol has been slowing the disease down, but is not stopping or reversing disease progression. Unfortunately, the available treatment options do not look very promising… I will write more on that later.

1: For those wondering, carbopatin, Taxol, Avastin, Tagrisso. Now I am maintenance therapy with just Taxol and Tagrisso.